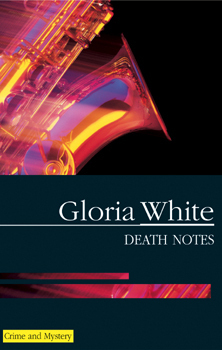 When Ronnie invites her friend and mentor Blackie Coogan to join her at the comeback concert of Match Margolis, the greatest tenor sax and jazz composer alive, she is not expecting a final--very final--performance.

From Booklist:
San Francisco PI Ronnie Ventana, an avid jazz fan, attends a concert by jazz great Match Margolis. At the end of his set, Match approaches Ronnie. To her horror, he's been stabbed and slumps to the floor, dead, before he can say a word. Not only does Ronnie have to contend with the shock of the jazzman's unexpected death, she also must deal with her old nemesis, Lieutenant Philly Post, who is in charge of the case. When a rumor goes around that Match whispered the name of his killer to Ronnie just before he died, Ronnie realizes that she may be targeted as the next victim. Despite being warned off the case by Post, Ronnie launches her own investigation, quickly determining that the victim's wife has something to hide. An engaging mystery with an appealingly cheeky heroine, brash humor, and plenty of unexpected twists.
-Emily Melton, Copyright © American Library Association. All rights reserved

"An engaging mystery with an appealingly cheeky heroine, brash humor, and plenty of unexpected twists."
- Booklist